I was born in 1943 at Derby Royal Infirmary, a war baby, and for the first 18 years of my life my home was in Ashby de la Zouch, an old market town in Leicestershire. I was sent away to become a boarder at Kings Mead Preparatory School, Seaford, and then Rugby School. Having been at Rugby has certainly stood me in good stead throughout my life, and I could not have asked for better.

I am still not quite sure exactly how it came about (perhaps because my maternal grandfather was a solicitor) but I suddenly found myself articled to a firm of solicitors in Ashby. It was not a happy period for anyone concerned, although I have to concede that I learned a lot during my time there, but it was clear that I was too much of a free spirit to enjoy being chained to a desk for a pittance each week. The only highlights to my miserable years as a bookworm were trips out to criminal courts or prisons. I must have been to every prison in the Midlands.

Concurrently, I was commissioned into the Territorial Army and still proudly display my certificate signed by HM The Queen.

When my parent’s marriage began to founder, I relocated to West Sussex to help out at their latest venture, a country hotel. My few weeks’ offer of help (neither of my parents having even the slightest knowledge of, or interest in, the hotel industry) turned into some 35 years, with me taking over from them, changing and extending the place considerably along the way. My restaurant in the hotel held 2 AA Rosettes for food for a number of years right up until I sold the business.

My son Marcus, my pride and joy, was born in St. Richards Hospital, Chichester. As I write this, he has turned 41, and he is an accountant. Married to Tina, they have provided me with two lovely grandchildren, Josh and Sam.

After I sold my hotel I moved up to Lancashire, where I had met and later married Sally. We started a new business together, a commercial legal services company, something completely new for both of us. During that time we encountered a puppy, Freddie, a Jack Russell/Staffie cross, who we “rescued” from the RSPCA and fell in love with.

We sold out on a high after some 10 years, enabling us to seriously consider the move to Tenerife. With nothing to hold us back, we made the life-changing move, and have not regretted it. Did I think that retirement would be relaxation in the sunshine? Far from it! I think that I have never been so busy, and the latest of my activities is becoming restaurant reviewer for the main Canary Islands newspaper. I was flattered to have been invited to the position. Our exploits in Tenerife with Freddie form the backbone of the stories in my first book.

My second book is an entirely different proposition, a different genre, and written in a completely different style. When a cache of letters, written by my father to my mother during the years of World War 2 eventually came in to my possession, I concluded that I should share some of them with a wider audience. In between a selection of those letters is traced the story of his life over those five long war years. It fascinated me to learn of the day to day life of an enlisted man – and later officer – as the war progressed to its inevitable conclusion, though finally without him as he languished behind the wire in a POW camp in Germany after having been captured on the battlefields of Normandy. And so, his story has finally been written and my second book has now made it into print.

I was persuaded to write my third book as a prequel to my first. It is the story of my life as a hotelkeeper, joining a family affair in my early twenties, and trying to turn around a loss- making business from impending disaster into a well thought of country house hotel. All was not to be plain sailing... 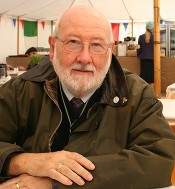