The Reluctant Hotelkeeper by John Searancke is an engaging memoir that takes readers into the life of the author who ended up reluctantly being a hotelkeeper, and how his rescue mission ended up being a love affair with an old building. His parents had bought the place in the countryside to save their crumbling marriage, and the author was pulled into this venture when he was just 22. The role of a hotelkeeper is not as easy as many think because the reality of life in a hotel is very different, and the hours required to make it a success are punishing. The memoir is also a tribute to all the people who worked behind the scenes and helped in making this grand transformation a huge success.

The memoir is straightforward and honest, entertaining and insightful, and the author opens up about the difficulties he faced, and how he managed to keep his faith in long-term planning. There are a lot of interesting stories about eccentric guests, how many guests who checked in should not have been seen together at all, and how it ended up being one of the favored stops for a number of celebrities. The author goes through the entire process, speaking about transforming the hotel methodically and in detail, taking readers along with him and his experiences while getting the old building renovated to cater to the needs of a modern traveler. There is not one boring moment in this memoir and the positive narration and outlook make this memoir an encouraging and motivating read. The author's story and experiences are enriching, and the ups and downs of his life and the accolades he received for the hotel and its restaurant will encourage many readers out there to become hotelkeepers.

This is the exciting new eBook front cover chosen by my publishers for 2022! 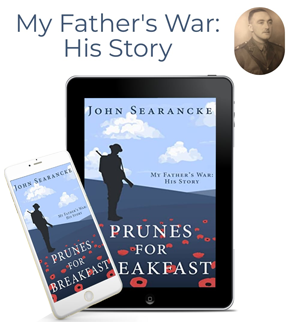 Prunes for Breakfast: One Man’s War Based on a True Story is a memoir by John Searancke. This memoir gives readers a heartfelt glimpse into the life of the author’s father, Eddie Searancke, during the war years of 1940-1945. Eddie had led a leisurely life while working in his father’s construction company, but that changed after joining the army. Although he was not an officer, that did not stop Eddie from becoming one by unconventional standards. He assumed the war would be short-lived with acceptable amounts of casualties, but nothing prepared Eddie for the horrors that he experienced, especially after the Germans captured him. Despite the hardships, Eddie managed to keep his wry wits about him while writing letters to his indulged bride, Elizabeth, and his father.

John Searancke did not know his father very well and often heard how the war had changed him. It was only after Eddie died that he began to connect with him through a packet of letters that Eddie had written to his wife. These expressive letters, which are included in the memoir, give insight into Eddie’s daily thoughts and activities while enlisted. Food and basic items were scarce, yet it surprised me to see how Eddie procured them for his family, and how he managed to conduct family business during the war. John Searancke’s writing captures his sentiments as well as his father’s experiences very nicely. Prunes for Breakfast: One Man’s War Based on a True Story is a poignant military memoir that I highly recommend reading.

"A touching and excellent memoir that doesn't sugarcoat the time period. Good for the casual reader, but history students should definitely pick this up as a source with first-hand content." - Reader for Bookangel

Edward Searancke was called up to serve his country in 1940, not long after the outbreak of the Second World War and we hear his story from initial call-up, through the years of preparation for the invasion of France, to his eventual release as a Prisoner of War and return home to attempt to pick up the pieces of everyday life. It's a delightful mixture of the mundane and the dramatic (being surrounded and captured in an orchard in Northern France and his life as a prisoner of war) and much of the story is told through the genuine letters from Searancke to his wife which were handed to his son after his father's death. John Searancke tells us the story of his father's war.

Prunes for Breakfast tells the story of one man's war and how he felt about what was happening to him. Edward Searancke approached the war much as I suspect he approached his life - determined to get the best out of it and prepared to work hard to do so - and rose from Private to Captain in the course of four years.

The letters are not about great things, but the mundanities of living and his son's skill as an author is shown by the way in which his father's voice in the letters follows through into the accompanying narrative. The story is lightly fictionalised - but it's very difficult to see the joins.

Although the story concentrates on the personal it gives an excellent insight into the planning of the war. The telling is cleverly done - this wouldn't be my natural reading matter, but I was fascinated.

I began reading Prunes for Breakfast with interest, but found myself more and more drawn into the story, which was a real pleasure to read. I'd like to thank the publishers for sending a copy to The Bookbag. 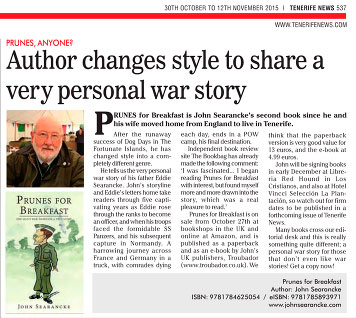 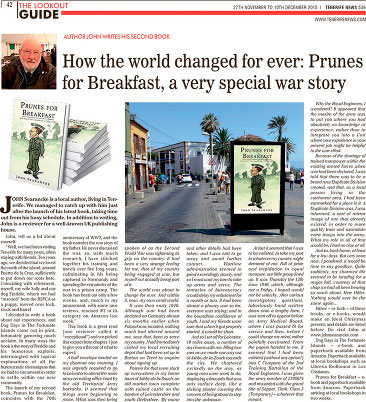 Dog Days In The Fortunate Islands

"Sceptic" is my middle name so when "Dog Days in The Fortunate Islands" was recommended I signed into the old habit of being suspicious of holiday destinations. Why? Tenerife to me was bracketed with Magaluf and Torromolenos as destinations for the fish, chips and alcohol loving Brits. How wrong can a food loving Doubting Thomas be? VERY wrong! What an insight into the glorious life experienced by the author John, his wife and of course Freddie the dog.

John takes his readers wonderfully through the trials and tribulations of settling in to the Northern Tenerife lifestyle, passing through hilarious experiences fitting into what seems to be a foody's paradise; yet not leaving his previously very colourful life behind. A joyous, informative and almost home-style read which should be enjoyed by all fellow sceptics.
- Elizabeth Harvey

'Not everyone can afford to travel. So the next best thing is a good travel book. Dog Days in The Fortunate Islands is a good travel book. Can you imagine just suddenly selling your house and business in the United Kingdom and moving with your wife to one of the most beautiful islands in the world. That’s just what John Searancke and his wife did and he wrote the most charming book about it and the wonderful road trips he made during a three year period.

The island they retire to is one of the Canary Islands, formerly known as the Fortunate Islands. One of the longest road trips he makes is traveling through Spain in his 24 year old Mercedes 300 SL to his home on Tenerife.

The book is well-written and Searancke uses engaging language. He has a way of using words that captivates your imagination. Some of his words were so wild that they didn’t register in my Kindle dictionary. His restaurant reviews were a tantilizing treat. I loved how he always included a “loo” rating.

He doesn’t hold anything back when he’s describing his friends and his friends are a colorful group from Pedro the gardener to Dick a wealthy friend in France to his beloved four paw friend Freddie.

The book has a Restaurant guide at the back of the book. I wish he would have included a couple recipes, too. I think those who love to travel, love cars or care for a pet will be drawn to this book. I was given a complimentary copy of this book by the publisher through NetGalley in exchange for an honest review.'
- Bibliobetty Reviews, 30 April 2014

“This is more than, and different from, a travelogue. This is the later-life true adventure story of a hard-working couple who decided to retire and up-sticks from Lancashire, moving themselves, their beloved rescue terrier crossbreed, Freddie, and their lives, to northern Tenerife. Woven into the narrative are some delightfully told, and at the same time downright useful, reports of obtaining refreshment and nutrition when out. These range from the minor, a superb cup of coffee (and we all know times when there is nothing more important), to the surprise of a sublime, yet incredibly low-cost meal at a guachinche, or temporary restaurant whose license lasts only as long at the owners’ own wine of the latest year. I was particularly touched by John Searancke’s writing style. There is something endearingly old-fashioned about the way he chats though the pages. One finishes the book feeling like a trusted friend. This is skilled writing: just enough detail to tickle the imagination, but no hint of overkill. I emphasise that an ambition or actual plan to migrate are not required to obtain great value from this thoroughly enjoyable book.”
– Carol Page

“Sick and tired of rain, damp and cold, John and his wife Sally decide to stop talking about moving somewhere warm and sunny and just do it. They drive from Lancashire with their beloved dog Freddie across sunny Spain and end up in Tenerife. Here, they will live the life they have always dreamed of…eventually. First they must find a home, navigate through the Spanish legal system, make friends, improve their Spanish and take the horrible, terrible, no good, very bad Spanish driving test. Full of laughter and plenty of that sunshine the couple were looking for, this is a wonderful read for all of us who dream of living our lives in the sun.”
– Cayocosta72 Book Reviews

“I've read countless examples of 'let's move to a sunnier climate' memoirs, and it's a very variable genre. But John Searancke can write - he's a restaurant reviewer - so this one is a cut above. And his move from England was carefully-planned, not a mid-winter whim. He's a colourful character, and knows how to tell a good tale. A lively read if you'd like to know more about Tenerife, or if you enjoy non-fiction that spans history, culture, and a realistic look at the ups and downs of a later-life move to the Canaries - the 'Fortunate Islands' of the title.”
- Elaine Scanlan, travel writer

“A superlative debut about relocating to northern Tenerife. The only worry for John is that he risks endangering his unspoilt patch of Tenerife by being so effusive in his praise. Readers won't be able to help but follow his lead."
- Matthew Hirtes, author, 'Going Local in Gran Canaria: How to Turn a Holiday Destination into a Home' 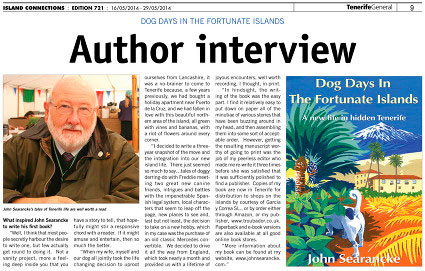